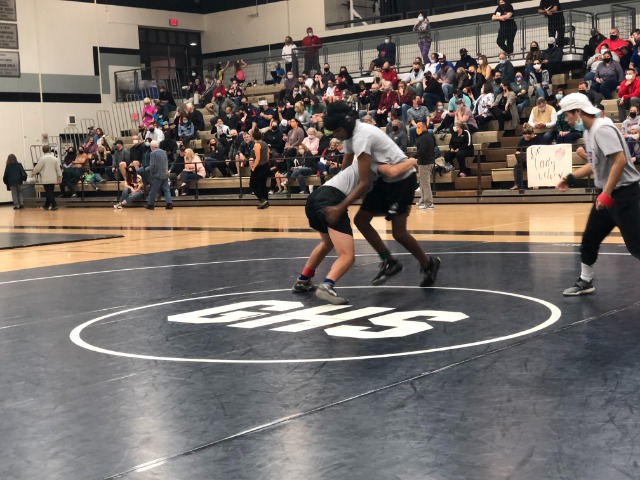 The West Wranglers traveled to Cross Timbers Middle School on Tuesday night for their 2nd Wrestling Match of the season. The boys team went 6-8 in the evening and 7th Grader Gabe Villa won 3 of those matches, 2 with pins and his first match he won 13-6! Prathmesh Durugkar won his match for his 2nd victory in a row with a score of 4-0. 7th Grader Dristant Chaudhary also won his match with a pin versus Cross Timbers. Alex Besaw was the lone 8th grader with a victory on the evening as he defeated his opponent by a score of 10-2. The Wranglers scored 28 points as a team! Our Wrestler of the week is Gabe Villa! The Wranglers are back at home in the CHS arena the week after Spring Break!

The Lady Wrangler faced some tough competition last night. The girls went 1-3 last night earning 6pts total. Valeria Coloma, Emma Bailey, and Gisselle Canchola all worked hard but were unable to pull out a win. Ishitha Mallidi was our big winner for the evening coming in late in the second round, down in points, and able to successfully pin her opponent and win her dual. She became the first girl to win a Wrestling match in school history last night! Congratulations to Ishitha Mallidi for the win and being our wrestler of the week!