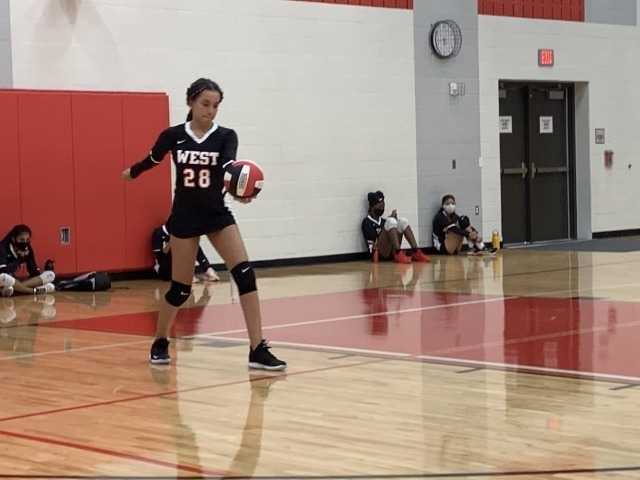 The Lady Wrangler Volleyball teams put up a good fight last night at their first home game against a new district competitor, Vista Ridge Middle school in Keller ISD. The C team started the night off with some definite first game jitters that needed to be worked out. However, the second game the girls looked a lot more comfortable on the court and started getting some great rallies going. Aubrey Witherspoon and Duanery Sanchez led the team in offensive plays to put the girls ahead at one point in the second game, but with some touch servers on the Vista Ridge team, the Lady Wranglers ended up falling short by 4 to end the match. Overall, a great effort by all of the girls, especially for the first games of the season. We are looking forward to seeing improvement each week and watching a great volleyball season unfold!

The Lady Wranglers put up a tough fight against the Vista Ridge Panthers at home on Thursday night for their first game of the season but ended up coming up short. Playing without their fellow players on other teams cheering them on was hard to keep their spirits high. A-team kept a pretty close game the majority of the time with Muneera Seif’s serves getting us 5 points in the first game. Marley Sloop had a slow start, but once she got off the net to hit in the second game she was able to get us 2 kills. Next week’s game against Chisholm Trail will be better as we will learn to talk on the court and have those first game jitters behind us!