8TH GRADE FOOTBALL GETS FIRST VICTORY OF THE YEAR 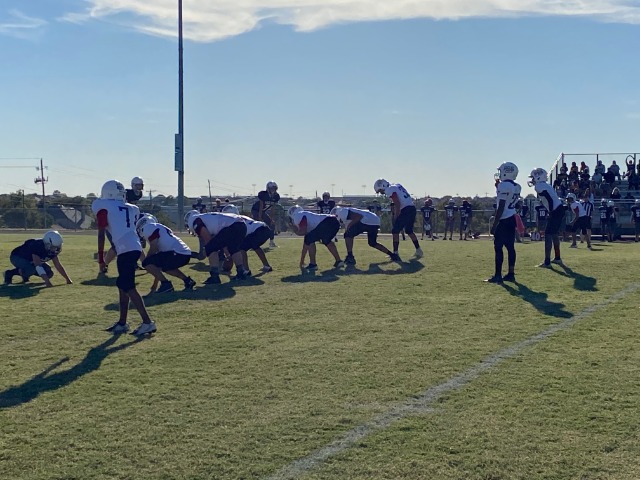 This week the Wranglers took on the Indian Springs Eagles. It was a tough match up, but the Wranglers put their all into the game. The defense hung in through the first quarter, not allowing the Eagles’ offense to score until the second quarter. Linebackers Julian Walker and Ryker Villines led the way for the Wrangler defense, with multiple big time tackles for a loss of yards. Outside linebacker Sam Jinu, added to the tough defense, helping the Wranglers hold the Eagles to only 14 points. Running backs Gabe Villa and Justice Ihezie led the team in rushing yards. Wide receiver Aryas Raut was able to catch an amazing pass from quarterback Drake Baes, for a big time first down. The Wranglers showed heart and improved tremendously from their previous game. They hope to continue their growth and defeat the Pike Middle School Panthers on the road.

The 8th Grade Wranglers traveled to Indian Springs Middle School in Keller this week and took home their first victory of the season! The Wranglers scored early and often against the Eagles and the defense tightened up when they needed to. West moved the ball on ground and through the air all night long! Amazing runs by Jaydon Anderson, Parth Patel, and James Faison thrown together with catches by Patel and Khalid Azzam on the night led to the offensive outburst! The defense was not to be overshadowed though and played equally as well. Leading the charge was defensive lineman Atharva Naktode and Alexander Besaw in the secondary. Late in the game it was JT Tapia that sealed the deal with a late interception in the Eagles end zone. The Wranglers would run out the clock on their last possession to complete the victory 33-20. The 8th Grade team is back in action next Tuesday versus Pike Middle School!