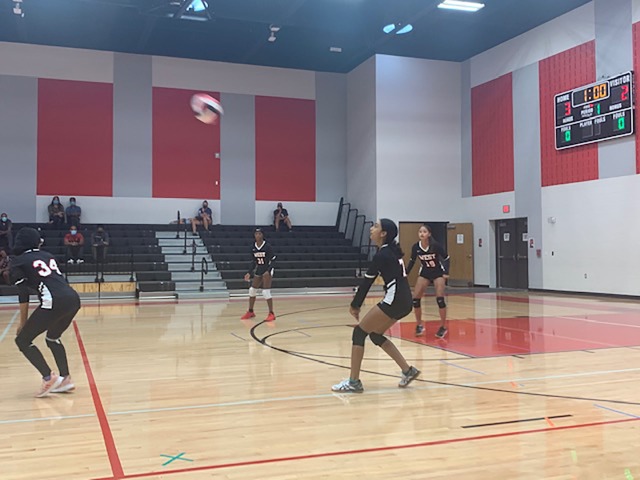 The Lady Wrangler B team had an exciting start to the night and fought very hard in hopes to get their first win of the season against the Pike Panthers. The first game had a slow start, but the girls kept rallying and had a good come back, but fell short in the end with a score of 18-25. The second game was not like any other and the girls had the lead most of the game. All girls contributed and played their best, but the Lady Wranglers fell short with a score of 27-29. Players of the game goes to Alina Ye who stepped up with her awesome serves in both games and Aubrey Witherspoon who was all over the court taking the ball over and getting in some great hits against the Panthers. The girls are looking for their first win and are ready to get that on the road this next week at Tidwell.

A-team came out stronger than ever even though we were only down to 6 players and no subs. Our small but mighty team started off strong with Arya Catna’s amazing floater serves to get us 6 points in a row in the first game to gain us a strong lead. Isabel Agudelo made sure her serves were great and passes were perfect to get a great set to the hitters. The team was ready for anything that came over the net and able to send it back over the net to a place in the court where no Pike girls were to be found. Our steady-mindedness held through until the end of the game and we were able to up our record for another WIN!!!! See you next week, Tidwell!