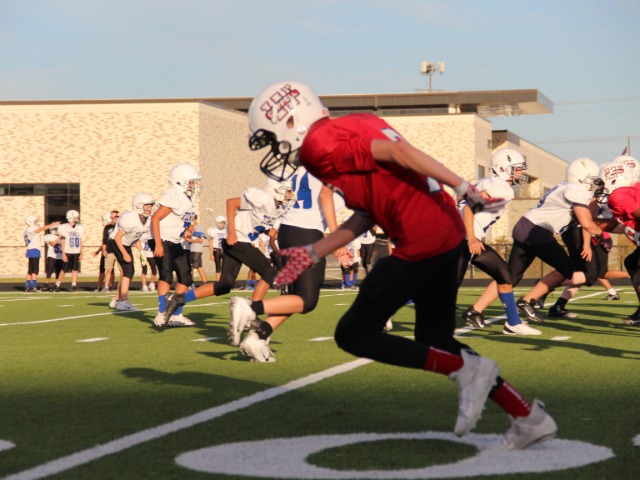 The Wranglers took on the Tidwell Titans in a hard fought battle. After the first possession of the game, the Wranglers began to play better on defense. Linebacker Ryker Villines was accompanied by defensive lineman Tiam Ansari with the first big tackle and stop of the game. Later, safety Stanley Calvin made a touchdown-saving tackle that helped to give the Wranglers some positive momentum. Before the end of the first half the Wranglers’ offensive line stepped up and made a wide path for running back Gabe Villa, who had continued to run tough for the third game straight. Next week the Wranglers look to bounce back and win their first game of the season against Fossil Hill Middle School Panthers.

The Coppell Middle School West Wrangler 8th grade football team was back at their home field Tuesday for the first time since their season opener as they faced off against Northwest ISD’s Tidwell Middle School. It was a tough night for the Wranglers, especially on the offensive side of the ball. The Wranglers struggled early and often to get into a rhythm on offense and move the ball consistently. The defense had a few bright spots, none bigger than when Parth Patel took a pass out of the air and returned it all the way for the touchdown early in the third quarter! That put the Wranglers on the board with 6, but the Tidwell lead was too much to overcome for West. The 8th graders will travel to Fossil Hill middle school next week.