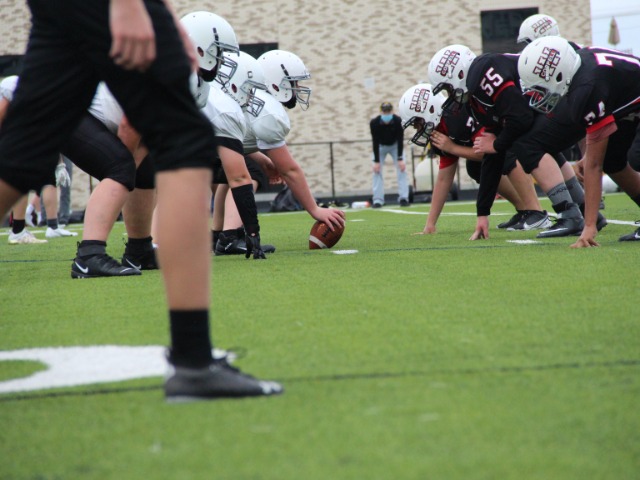 7th Grade
West 6
FHMS 42
This week the Coppell Middle School West Wranglers took on the Fossil Hill Panthers. The Wranglers came out swinging and managed to drive the ball down the field. Offensive linemen Julian Walker, Cameron Molina, Srivanth Rudrangi, Tiam Ansari, and Sre Surapaneni stepped up and led the way for the offense, and the improvement the team experienced. Running backs Gabe Villa and Justice Ihezie both had over 60 yards rushing despite the tough loss. Wide receiver Ryker Villines caught a pass from quarterback, Drake Baes, and ran 65 yards for a touchdown. His catch and run is one of the biggest plays the team has accomplished this season. Defensively the Wranglers struggled to make tackles. After long offensive drives, players that also had to then play defense, were naturally more worn down. Although this was a tough loss, the Wranglers saw more improvement offensively than they have all season. Individual players also stepped up as vocal leaders, helping to keep the team motivated. Next week they’ll take on their cross-town rival, Coppell Middle School North. They look to bounce back and achieve their first victory.

The Wranglers 8th grade team was back at home on Tuesday to face off against Keller Fossil Hill. Another slow start for the Wranglers as Fossil Hill would recover a mishandled kickoff by West and would score shortly after to take the lead. The very next possession for West only last two plays before a Fossil Hill interception was returned into the endzone for a touchdown. The Wranglers quickly saw themselves down 14-0 just 2 and a half minutes into the game. The Wranglers would settle down offensively and pick up their game defensively as well. After two more Fossil Hill touchdowns, West QB Parth Patel took a quarterback keep 73 yards to the end zone and Jacob VanLuvan added the extra point to get the Wranglers on the board. On the Wranglers very next possession, Patel took another quarterback keep 65 yards to the house and also added on the extra points himself. After making a few halftime adjustments the Wranglers came out ready to go defensively, only giving up one score in the second half. But it would not be enough and the Wranglers would fall 16-38. The Wranglers are at Coppell High School next Tuesday to take on the North Cougars.