WRANGLERS FALL TO COUGARS IN BATTLE OF BELT LINE 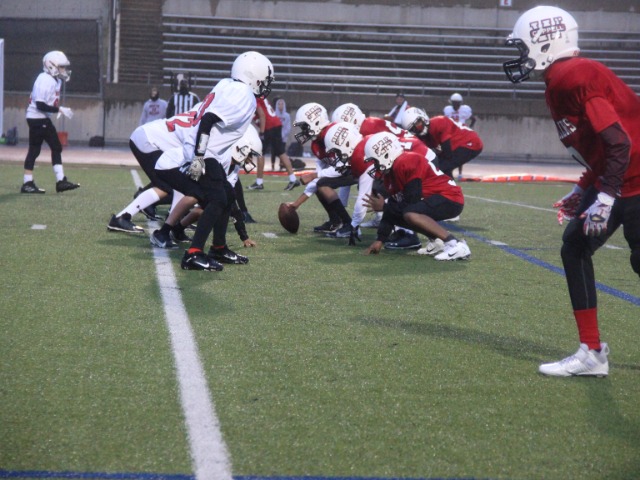 7th Grade
North 27
West 19
This week the Wranglers took on the Coppell Middle School North Cougars in a tough, cross-city rival match-up. The Wranglers got off to a slow start, but held the Cougars to just 21 points in the first half. Linebackers Ryker Villines and Cameron Molina jump-started the defense with multiple tackles for a loss giving the Wranglers energy when they needed it most. Cornerback Zyan Patel helped to add to the defensive success with an interception. The Wrangler offense turned the interception into a scoring drive, led by running back Gabe Villa. Zyan Patel, who also played wide receiver, managed to catch and run the ball for positive yardage. In the 4th quarter the Wranglers were down by 8 and needed a touchdown to have hopes of tying or winning the game. The defense stopped the Cougar’s offense with about 3 minutes to go and gave the Wranglers good field position. Quarterback Drake Baes led the offense down the field to the 15 yard line, where the Wranglers attempted to score on 3 separate plays. Although the Wranglers came up short, they saw the most success they’ve had this season. Next week they look to end the season with their first win against Vista Ridge Middle School.

The Wrangler 8th grade team faced off against Coppell Middle School North this past Tuesday at Budy Echols Field at Coppell High School. It was a cold and wet affair and the Cougars were too much for the Wranglers to handle. North began on offense and took only 4 plays to get into the endzone. The Wranglers would mishandle the ensuing kickoff and the Cougars would score another touchdown quickly after that. The offense for the Wranglers struggled on the evening to get anything going and found themselves moving the wrong direction most of the night. Late in thee third quarter, Running Back Julian Tapia took the handoff from Parth Patel and went 55 yards down the right sideline weaving in and out of Cougar defenders and into the endzone for the Wranglers lone touchdown of the night. The Wranglers finish off the season on the road next week at Vista Ridge Middle School.