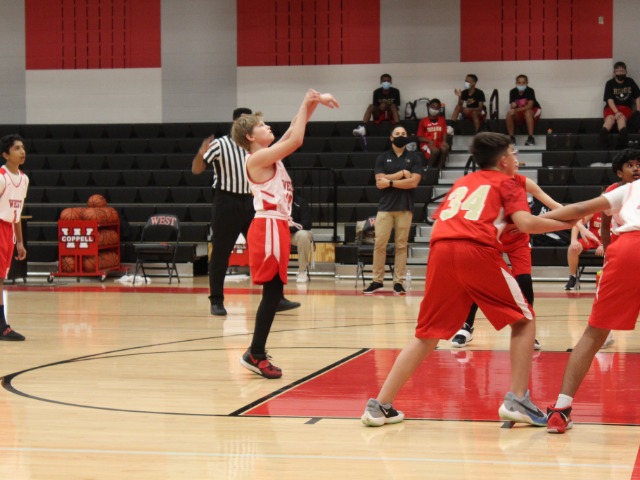 The Coppell Middle School West Wranglers took on the Indian Springs Eagles in their first road game. The first quarter was back forth as Coppell West and the Indian Springs Eagles were trading baskets. Trey Holt made two three-pointers to tie the game at 11 to the end of the first quarter. The Eagles went on an 8-0 run in the second quarter to have an 8 point lead going into halftime. In the second half, Cameron Molina and Aston Huynh grabbed several rebounds apiece, but it was not enough as the Indian Springs Eagles came out with the 47-22 victory. The Wranglers are looking forward to their next game against Pike Middle School after the break at home on January 11th.

CMS West:21
Indian Springs: 26
The Coppell Middle School West Wranglers played their third game of the season on the Indian Spring Middle School Eagles. The game was action-packed from start to finish. The first started with the Eagles getting out to an early 8-4 lead. Baskets by Bobby Hatfield and Vignesh Dhanasekar to cut into the Eagles lead. The Wrangles went into halftime down by 2. At the start of the 3rd quarter, the Wranglers went on a run and took the lead for the first time in the game. But the lead was short, and Indian Springs pulled away with the victory with the score of 21-26. The Wranglers will be looking to bounce back after the break at home on January 11th against Pike.

The Coppell Middle School West Wranglers lost their first game of the season on the road against Indian Springs Middle School. The final score was 21 to 19. Wrangler point guard Jai'den Chatman led the Wranglers in scoring with 15 points. Taha Nicobar made up the rest of the team’s points with 4 on the game. Omar Ismail led the Wrangler defense with multiple steals and forced turnovers. The game was close throughout all 4 quarters and came down to a last second shot at the buzzer. Unfortunately the shot was missed and Indian Springs pulled off the win. After the break, the CMS West Wranglers will take on Pike at home. The game will be played on January 11th.