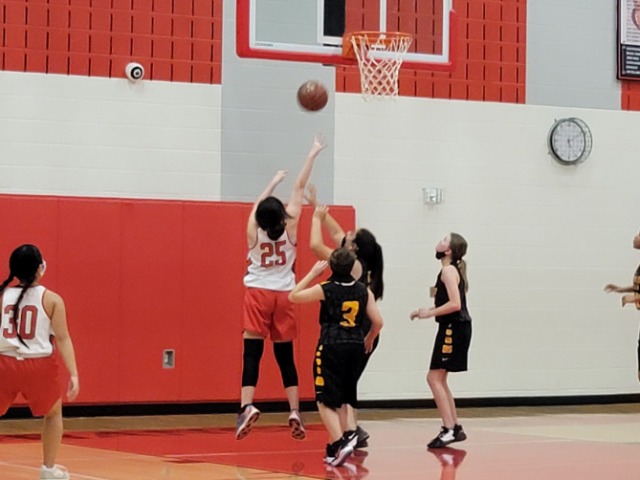 The C team really stepped up their technical game this week. The shot to basket percentage was not something to brag home about, but their coachability was outstanding. The girls really took what we talked about in the time outs to heart and were really good about their outlets and rebounds. Though I wish the score reflected the level of play that I saw out there, I couldn’t be prouder of them! We just need to working on getting our baskets in now!

B Team was up next. Feeding off the energy from the C Team game, the B Team came onto the court ready to play. Once again, the girls scrappiness helped to pull them out of some tight places. Our fouls had the potential to stop any chance of a win considering we gave them 12 free throw attempts. We were lucky that they only scored 2 on their free throws. After being tied at half and down by 1 at the end of the 3rd quarter, the girls pulled off a 2 point win. Congratulation B Team.

A Team was our final game of the evening. They also seemed ready to play. We were just missing some of the energy of they crowd considering most of our girls had already left at the end of their games. The first half was a great game with a constant fight to be on top. At the end of the half, A team was tied. Our third quarter became the achilles heel that proved fatal for us. Chisholm Trail outscored us that quarter 6 to 2 which ended up being the same deficit that we lost the game. The girls did a great job, left their heart on the court and gave 100%.

Players of the Game