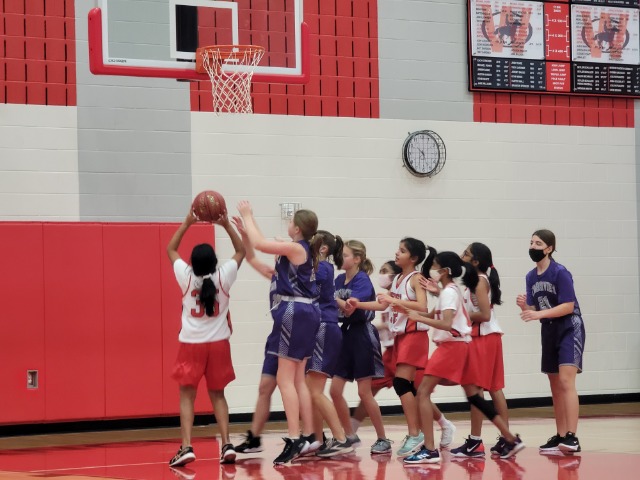 Coming off the first victory of the season on Thursday night, the Lady Wraglers were once again hoping to add to the win column. Overal,l they did a great job and managed to shoot free throws today at 50%. In the end, both B and C Teams managed to come away with victories.

The A team was up first. The one thing they finally brought to the court was that scappiness we have seen from the B and C teams all season. It was great to see them with greater hunger out on the court. After a close first quarter, the girls fell behind however and were not able to recover. Their spirit never dimmed and they were successful at executing the inbounds play correctly for the first time this season.

B Team was up next and brought their usual energy. From tip off until the final buzzer they gave 100%. The Lady Wranglers were ahead during the game from the first score, except for a brief time during the 3rd quarter. The girls aggressiveness showed up in our foul column however, so we know we should work on better positioning and hopefully not run into that problem again. Congratulations on your win ladies!

C Team was our final game of the morning, and, man, did they improve so much from just Thursday! It looked like something off of YouTube used as an example. They were amazing about outleting the person up the court, and really succeeded in aiming for the top corner of the box on the backboard and getting their layups in. They were aggressive to the point that the other team didn’t even want to fight. We kept the other team off the score board until the last quarter, and took the match home. I am so incredibly proud of this group and can’t wait for the next game! Congratulations!

Players of the Game