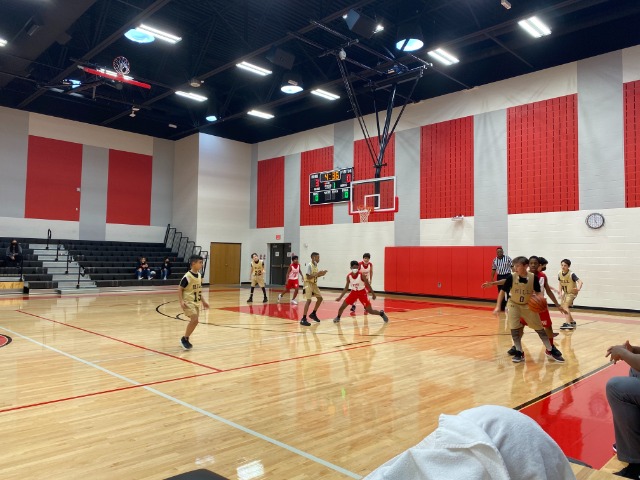 7th Grade:
West B Team:34
Fossil Hill:30
The Coppell Middle School West Wrangels won their last home game of the season against the Fossil Hill Middle School Panthers. The game started with the Wranglers starting hot from the field. Hatim Nicobar and Bobby Hatfield made a couple of three-pointers to help the Wranglers get out to an early lead. At the end of the first quarter, the Wranglers were up 13-3. At the start of the second quarter, the Wranglers cooled off a bit offensively, but their defensive efforts were still there. Ryker Villines and Zyan Patel made key stops on the defensive when the offensive went cold from the field. The Wranglers went into halftime with an 18-10 lead. At the start of the second half, the Panthers cut into the Wrangler lead and made it a one possession game. The Wranglers battled back and won 34-30. This weekend the Wranglers will look to continue their win streak as they take on the Medlin Middle School Mustangs on the road.

This week the Wranglers took on the Fossil Hill Panthers at home. This was the final game of the night, and it was action-packed from start to finish. The Wranglers started with baskets by Aston Huynh and Sebastian Pena. Then the Panthers came back with their few of their own to take the lead going into the 2nd quarter. The Wranglers responded with three-pointers from Drake Baes and Trey Holt. Levi Owira and Cameron Molina played great interior defense, and they kept the Panthers from scoring inside. The final score was 45-38, the Wranglers winning, pushing their win streak. The Wranglers look to extend their win streak as they face the Medlin Mustangs this Saturday.