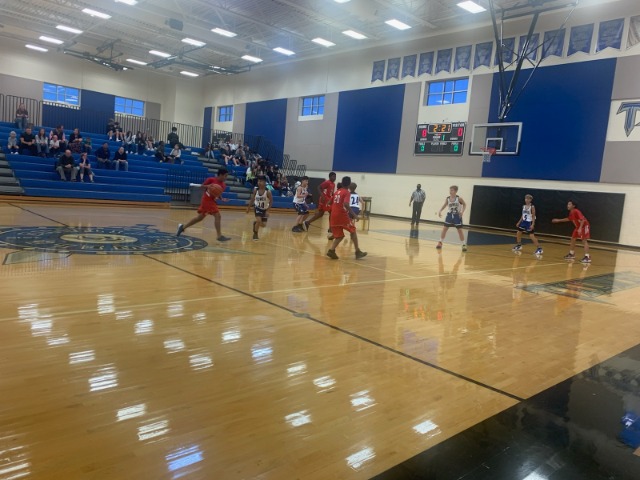 The Coppell Middle School West Wranglers took on the Tidwell Middle School Titans on the road for the first game of the season. The game was action-packed from the opening tip-off. The West Wranglers started with a ton of ball pressure from guards Evan Baltimore and Aayush Golla. The Wranglers were getting great looks at the basket but couldn’t convert offensively. As a result, the Wranglers were down going into halftime. Coming in from halftime, the Wranglers made a lineup adjustment to get the team going offensively. The adjustment helped but it wasn’t enough as the Titans pulled away with the victory. The Wranglers will be looking to bounce back next week at home on Monday against the Indian Springs Eagles.

The Coppell Middle School West Wrangler C Team lost their season opener this week to the Tidwell Middle School Titans. The final score of the game was 36-6. The Titans got up to an early lead and held the Wranglers scoreless throughout most of the first half. The Wrangler offense was able to make some adjustments and scored 6 points in the second half. The Titans held on and ultimately finished the game with the win. Renish Joshi led the Wrangler offense in scoring with 4 points. Vincent Nguyen led the Wrangler defense in rebounds and steals throughout the game. Next week, the Wranglers will take on the Indian Springs Eagles in their first home game of the year.

The Coppell Middle School West Wranglers C Team took the court for the first time this season facing the Tidwell Titans. The Wranglers defense held the opposition scoreless in the 1st quarter, but the Titans fought back and the score was 8-7 going into halftime. West held off a late rally by Tidwell to win the match-up 17-14. Abdul Mirza and Sree Surapaneni led the scoring with 4 points each, while Alyaan Dhanani played an outstanding defensive game on the other end of the court. Omar Ismail was the “Iron Man” of the game, playing for the entire contest without relief. This was Abdul Mirza’s final game for West as his family is moving. His effort and commitment to the team will be greatly missed! He demonstrated the true spirit of a Wrangler during his time here at West. The Wranglers next game will be on the road versus Indian Springs Middle School.