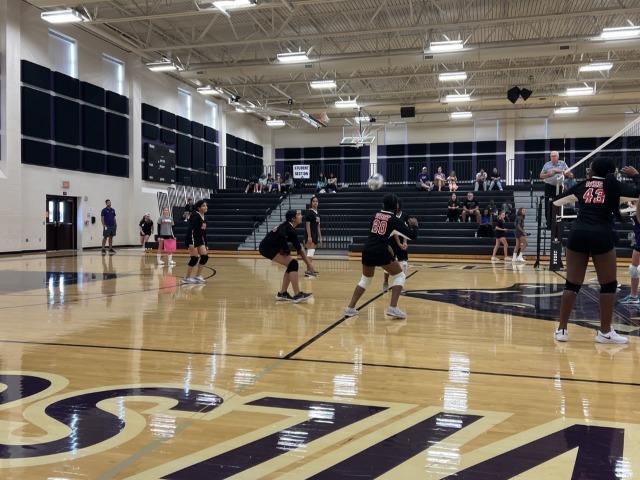 This week, the Lady Wranglers traveled to Haslet for a matchup against the Wilson Middle School Wildcats. The C team came off the bus ready to play and started the night off strong. They had high levels of energy and were consistently lifting each other up out on the court. The C team’s hustle and strong passing led to longer rallies than we’ve seen all season, and strong serves from Gargi Thakur, Reet Grover, and Sanvi Gubbi Arun helped keep them neck and neck with the Wilson Wildcats throughout the game. Although they did not ultimately come out with a win, the C team fought incredibly hard and left everything on the court. The player of the game was Jahnvi Solanki for her passing, serves, and hustle. The player of the week was Hema Punuri for her hustle, her incredible save during the game, and the way she consistently leads by example.

The B Team came out ready to play after cheering the C team on through a great game. For the first time this season, the B team faced a server using the float serve technique. Despite never seeing this type of serve before, the B team was able to learn very quickly how to respond to those serves. However, they struggled to return the ball and ended up spending most of the first game in serve receive. In the second game, they collected themselves, improved their communication, and worked hard to encourage one another after each point. The difference could be seen on the court and the scoreboard. Although the B team did not secure the win, they had a lot to be proud of from this week’s game, such as their ability to adapt in serve receive, their hustle on defense, and their communication in the second game. The player of the game was Isabella Smith for her powerful serves, positive attitude, and strong leadership.

The A team came out strong against the Wilson Wildcats on Thursday night. In the first set the Lady Wranglers did not allow the Wildcats to ever get more than 3 points in a row, and that is a goal that we have been working on all season. Emma Hurst had 2 big aces and a block to keep the Wildcats down and the Lady Wranglers came out on top with a 25-20 win. The second set has proven to be the harder set all season for this team. The Lady Wranglers battled the entire set, but unfortunately they just couldn’t pull out the second one. Esha Polishetty had an ace and other great serves, but it just wasn’t enough. Players of the game this week go to Pranavi Madala for her consistent game-play on both the front and back row and Amani Harper for her ability to switch positions and battle through no matter where she is in the line up. In the third set, the Lady Wranglers struggled to get it going, and one strong server from Wilson gave the girls a hard time in serve receive. The girls continue to push through and will continue to do just that this next week at home against Trinity Springs.